Montana and the Mountain Goat

I've been to Montana a couple of times.

It is, without a doubt, one of the most beautiful places on this planet. Photos do not sufficiently communicate the grandeur of this incredible place, although I'm including four photos I took then (not originally in digital form).

On both trips, I visited friends on the Blackfeet reservation in Browning. I stayed on their couch on trip # 1, and in a local hotel on trip # 2.

I stayed on the couch at the parents' house of a good friend. He was also there, along with his wife and two children, one of his brothers, one of his sisters, and three of her children. The children were precious. Big-eyed and playful, we had a ton of fun. We were spread all over the living room in sleeping bags.

Inside an old tire laying on the front lawn, two puppies curled up along the inner rim, staying out of the sun. They were shy and sweet.

One day, we went on a picnic, the entire mess of us. We piled into mom and dad's pickup truck and my rental car, and took off to a nice spot way out by a lake. There are no roads out there -- not even dirt roads. I was driving the rental car right through tall grasses down the sides of hills. We really had a great time.

There weren't really any street names out there (except right in the tiny heart of downtown Browning), and certainly no street signs. Driving directions sounded like this: "Go way down that road there. When you see the water tower, turn left. Go way aways until you see the...." And the directions worked perfectly, every time. I had several other friends up there and I managed to find them all.

My friend took me hiking up in Glacier National Park one day. This is the Rocky Mountains. We set out in the morning, drove up to the parking lot by Going to the Sun Road, and hiked up to the top. Then we hiked all the way down the other side (we're talking a tiny hiking trail winding all the way down the side of a huge mountain), right down to the very bottom, where there was a beautiful lake. We hiked around to the other side of the lake and sat down in some soft, wild grass for a breather. We just sat in silence and enjoyed the wonder, sounds and beauty of the place. After a little while, it was time to head back. Hiking back up that mountain seemed easy enough for him, but there were times when my legs absolutely refused to move. I just couldn't lift them, and would have to stop for a minute or two. By the time we got all the way back up to the top and then down the other side to the car, I was pooped. Exhausted. We found a restaurant just outside the entrance to the park, and stuffed ourselves with huge buffalo burgers. To say that they hit the spot would be an understatement.

On my second visit, I collected up my friend's 10-year-old son, and the two of us drove up into Canada to Fort Macleod, where there is an amazing museum situated by a cliff called "Head Smashed In Buffalo Jump". This is where Native Americans had, for thousands of years, run buffalo off the cliff as a method of slaughter. It was a fascinating museum. On the way back, driving through the plains of the Blackfeet reservation (which covers a large area in both Montana and Canada), my young friend drummed on the dashboard and sang Blackfeet songs.

The Canadian border guard, when crossing into Canada, was quite friendly and pretty much just waved us through. The U.S. border guard, upon our reentry into the States, was a different story. He seemed to have some idea that he was perhaps catching somebody smuggling an Indian into the U.S. or something ridiculous. He seemed quite excited. First of all, the Blackfeet have their own treaty up there, with free passage on their reservation lands. And in any event, I had papers on hand for the child. The guard was crestfallen, and it was ludicrous. He was even more disappointed when he determined that all we had purchased up there were a few t-shirts, a mug, a hat and a few fridge magnets.

I did a lot of driving in Montana, as I had chosen on each trip to fly to an airport distant from my final destination, thus affording me the opportunity to see more of the state. I discovered then that I could drive for 4 or 5 hours, and then wipe the windshield with a wet paper towel, and have that paper towel still be white. With the exception of a few dead bugs, the windshield was still clean. This amazed me, living as I do in Southern California (one could say "Smog City"), where cars are filthy again within 24 hours of being washed.

On my second trip, I hiked up Going to the Sun Trail on my own. As I was coming around a curve in the trail, I came across a large mountain goat who was coming the other direction; we very nearly bumped into each other. He jumped off the trail, and I got a couple of nice photos of him (these are scans of film photos). 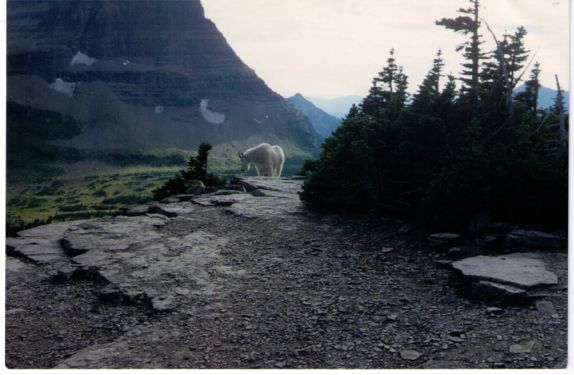 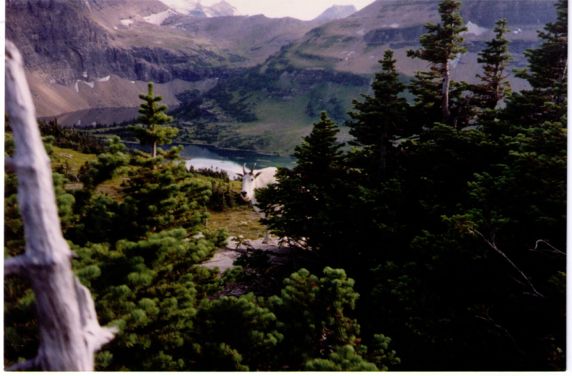 Here are a couple of other photos I took on that hike (again, scans of film photos): 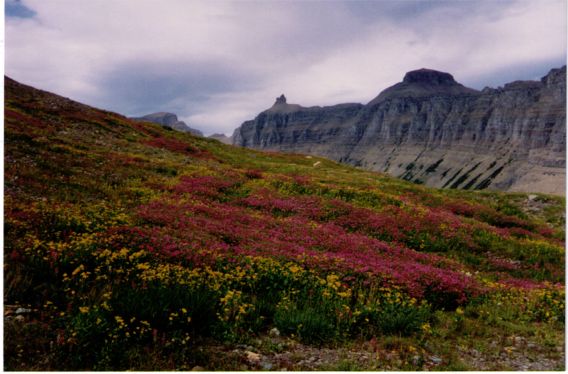 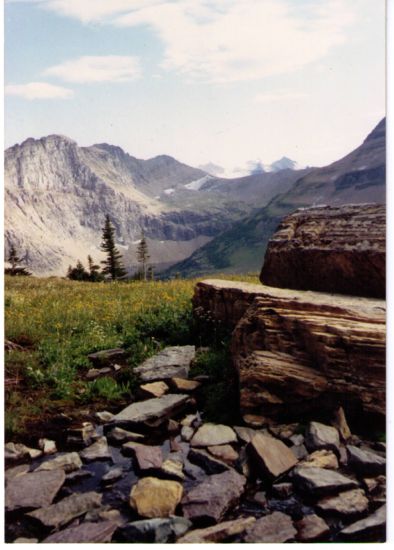 For a time, I owned five acres on a mountain near Helena. It was a little spot of paradise. I found a full deer antler on it once, and brought it home with me. I couldn't carry it on the plane, though ("dangerous weapon"). I had to somehow stuff it into my backpack and check it through. (Don't ask me why I had a backpack ... my friends would never let me go camping: "Bears.")

I met a lot of really fine people up in Browning. I just love that place! Montana is so very beautiful: words are insufficient. You must go to Montana.
Posted by JoJo Zawawi at 10:21 PM

I'D NEVER BEEN THERE BUT ANYWHERE MONTANA STILL BEING THERE.