I've spent a lot of time in Funchal, a beautiful town on the Portuguese island of Madeira (one of the most gorgeous places on earth).

Here are some of my favorite memories. 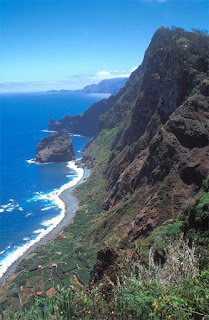 One New Year's Eve, I stayed up all night with a few of my friends.  In the morning, we drove around the perimeter of the island, stopping at a small cafe-in-a-home nestled into the hills overlooking a tall cliff by the ocean, where we had eggs fresh from the hen house. This was a true pleasure.

The dock in Funchal has a breakwater which formed the harbor. If you climbed up a ladder to the top of the breakwater, you could walk the length of it right to the end. It was completely covered in seagull poop and fish bones (from the seagulls).

At the end of the breakwater was a ladder going down the backside (the ocean side), leading down to a small platform off which one could swim. Keep in mind that this was right in the middle of the Atlantic Ocean. The swells were huge and it was often difficult swimming. On one such occasion, I was having a difficult time swimming back to the platform. Despite swimming as hard as I could, I continued to move further out to sea. A friend swimming nearby had fins on, and was able to drag me back to the platform.

There were also giant cement "jacks" lining the ocean side of the breakwater, which helped diffuse the power of the waves before they hit the breakwater. We often went climbing on these giant jacks. They were often slimy and covered with mussels and barnacles. It certainly wasn't safe, but it was a hell of a lot of fun. 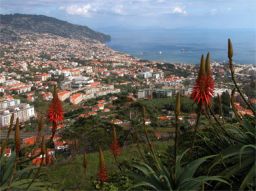 Funchal, and indeed, all of Madeira, is studded with avocado trees. I remember one sunny afternoon, walking up a winding cobblestone road up the mountainside. The road was peppered with occasional houses and even more occasional shops where old women dressed in black made and sold handmade lace tablecloths and other lace items. It was quite lovely. Anyway, this street had avocado trees just growing wild all alongside it. We picked some and enjoyed the fresh, ripe fruit.

There was a small, exclusive restaurant located in a basement below a small supermarket (an oddity in itself in those days!). This was up one of these little winding roads on a hill. And in this little restaurant, we would have tornado rossini steaks that were probably 2" thick and served on a 2" thick matching piece of delicious fresh bread, with the juices soaking into it. And all around this steak would be small, delicate servings of various vegetables. And there was a different waiter for every item -- one for the water, one for the wine, one for the bread, one for the meal ... the service was incredible. The entire meal ran about $2.

There was another restaurant, this one a tourist spot, called the Bird Cage. It had some very large bird cages filled with, if I recall correctly, quite a few canaries. Perhaps there were also parakeets. And it had, of course, plenty of small, round tables outside. What was fun about this restaurant was the menu. Somebody had translated it into English for the tourists, and one could order a "tunny fish sandwich".

We used to visit a discotheque up on the hill on our days off. They never failed to play this really dorky tune which, for reasons unknown to me, was incredibly popular in Europe at the time: Popcorn. It was just a stupid tune, and ridiculous to dance to. But the locals loved it and would pop up and down on the dance floor!

Madeira is just a truly gorgeous island. It's green and beautiful, and the people are really wonderful. I've definitely got to get back there one day for a visit.