Beautiful Portugal, and the Communist Revolution

I spent quite a bit of time in Portugal in the early 1970's. This post is about Lisboa. I will write separately about other wonderful Portuguese towns, cities and islands where I have been.

Portugal is one of the most beautiful countries I've had the pleasure and privilege to live in.

I've eaten many a fine meal at Gambrinus, one of Lisboa's oldest and classiest restaurants. I believe they were established in the 1930's. Portuguese food has got to be some of the best around. And I've watched more than a few movies at the classic Eden Teatro cinema -- sadly no longer a theatre. It had a huge glass front, and you would go inside on the first floor to find various small shops, and then go up the tall stairs to the cinema itself.

Once, someone gave me a sweet little doll. Its little arms and legs moved, and if you laid it down, its eyelids would close. It was fully clothed in traditional dress, detailed in miniature. This sweet little doll was only about 3-1/2 inches tall. I had that doll for nearly 35 years before finally deciding to part with it, the poor thing having lost both its little legs at different times somewhere along the line.

Sometimes I would go to the fresh cheese shop and get queso fresco (the best goat cheese in the entire universe), and to the vegetable stand for fresh, sweet oranges and newly-picked peas in the pod. Beautiful meals they made.

On other days, my friends and I would take the metro (subway) to the Lisboa Zoo, and go roller skating in the outdoor skating rink, under huge oak trees. They played music to skate to. The walk from the metro station to the zoo passed by the Jardin Botanico, a spectacular botanical garden. I remember that I always used to admire the flowers while passing by. 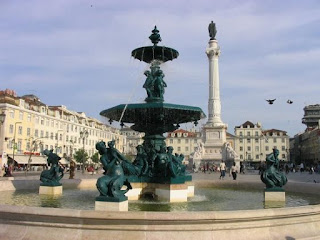 My friends and I used to go to Rossio often -- an old-world plaza in the center of Lisboa, with a beautiful fountain and several statues, surrounded by shops and cafes. There was one little cafe called the "Pickwick", where one could sit at tall, round cafe tables on tall bar chairs, or stand at the bar, and have an espresso and a ham and cheese sandwich. Or some TO DIE FOR Portuguese gelado (which I can say is the best ice cream on the entire planet).

It was near this wonderful plaza that my friends and I wandered out of a discoteque at around 4:00 a.m. on April 25, 1974, only to find the streets crawling with machine gun-toting militia men; a military-led Communist takeover was hotly in progress. There were legions of large trucks driving around, packed with soldiers who would occasionally shoot into the air. 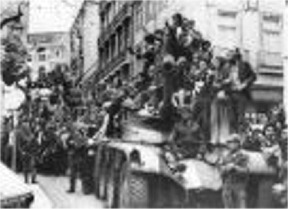 We managed to find one lone taxi and got ourselves home in a hurry, without incident. These communist revolutionaries then proceeded to deface with their slogans the beautiful fountain and statues of Rossio, slashing red spray paint across nearly everything in the plaza.

It was called the carnation revolution, because if you didn't wear a red carnation indicating your support of the revolution, you were deemed an enemy and dealt with accordingly. They didn't last long, in the scheme of things; Portugal's first constitutional government took office in 1976, and they have had a variety of governments since.

The red paint has long since been cleaned up. I hope that Portugal will be able to preserve the wonder and the beauty of this ancient city, full of warm and friendly people.

There was a certain smell of espresso and I don't know what else, all mixed up, which was the smell of Portugal. Sometimes when I drive by a local coffee roasting company, I get a brief hint which always reminds me of Lisboa. I do miss it. I would like to go back one day.
Posted by JoJo Zawawi at 12:00 AM