Storms I've Been In

I've been through some pretty wild storms.

I first became interested in the weather when we lived for a year in Illinois. I was 11 at the time, and in sixth grade. Our entire class went to camp for 4 days, and there, I found a "cloud chart". After that, I got myself a barometer and other similar knick-knacks, and learned all about clouds, weather patterns, etc. It's a passion that's still with me to this day.

In Illinois, they have these tornado clouds -- cumulonimbus mamma (aka mammatocumulus). There's something about seeing tornado clouds marching across the sky. The air gets electric with anticipation. They are the wildest looking things -- sometimes you feel like you've suddenly come into consciousness in an alien world. They often have a green or orange tint to them. And they look Really Scary. 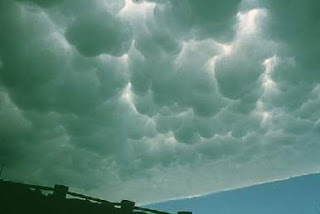 Sometimes during the night, the sirens would go off (tornado warning -- tornadoes have actually been spotted in the area), and we would open our windows and head for the basement.

I've already written about one storm in my "Memories of St. Charles" post. We used to get squalls like this all the time. The only other weather item of note that I recall about Illinois is when lightning hit the big tree in our front yard. I have NEVER in my life heard a noise that loud! CRACK! Split that tree right down the center. 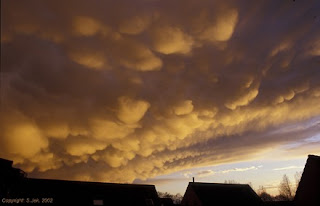 I've been in many, many exciting thunderstorms in the Southeast and all up and down the Caribbean. They are black and roiling and noisy and exciting, and they dump a ton of rain in a short amount of time before moving on and leaving you in the hot, sunny and intensely humid aftermath. We've even had a few of those here in Southern California, as well as up in Northern California, with lightening going on for hours and hours, hailstones popping and bouncing, and wind wailing.

I've enjoyed cold, blustery winter storms while riding the double-decker bus down the bumpy cobblestones of Lisbon, Portugal, doing my Christmas shopping. That's a wonderful memory. The smell of the wet roads, everybody wrapped up in raincoats, the spirit of the season. I would do it again.

During the El Niño of 1997, my husband and I were living way up in the Santa Cruz Mountains in a miniscule town called Lompico, a few "blocks" from Loch Lomond. We lived off a grooved, rutted, cruddy dirt road, on an acre of absolute heaven -- redwoods, redwoods, and more redwoods. However, the drive down into Silicon Valley was torturous, and during El Niño, it was horrifying. As I worked in Mountain View at the time (45 miles each way), I had to get up quite early. It was still dark when I left. I drove on windy mountain roads that paralleled creeks and streams, flanked by cliffs on the other side. Quite often during that winter, trees would fall and block the roads, or mudslides, or bridges would go out. One morning, I didn't even realize until I got to work that I had narrowly missed being covered by a mudslide -- the mud spatter was all over the top of my car and dripping down the sides. I had gotten through just at the moment it was coming down. I saw it as I was driving home (the road home was on the other side of the creek).

We even had snow that winter, right there in Silicon Valley. That happens maybe once every 20 years. And from our office building, I watched as lightning hit a transformer, blew it up, and put the power out in the entire area. Got to go down the stairs in the pitch-black darkness (oh, yeah -- that was fun...).

But probably the most notable storm I've been in was a huge hurricane. It was an incredible experience. We were sailing amongst the Açores islands at the time, and spent three days going up and down the lee side of the islands while the hurricane passed over. We had a few crew members ashore and so had to stay in the area.

You have never seen such a thing as a hurricane at sea! The waves were so huge, you could touch them from the aft well deck (normally, the sea level was around 10 feet below). And the waves were easily 15 feet higher than the aft well deck. That means they were about 25-30 feet tall. And almost glassy. Huge, monstrous things rolling by like an invading force. The spray that blew off the tops of the waves stung the skin, it flew with such force. And the wind just howled. I know that the weather archives show this hurricane as being a Force 1 hurricane (winds 70 mph), but I vividly recall that the winds we were experiencing were 120 mph (perhaps they set the "force" designations at the point that hurricanes hit the mainland). It was an absolutely amazing experience.

We never did worry about a thing, though. Despite the wildness of the screaming wind and the magnificent waves and the mess of it all, we had a captain with years of experience as a master mariner, and he got us through it without blinking an eye.

It was absolutely awesome.
Posted by JoJo Zawawi at 9:57 PM