It all began while we were at anchor alongside the Portuguese Açores island of Santa Maria, a mountainous port large enough to berth only its own small fishing boats. We had dropped anchor about a twenty-minute ride by sea-sled or lifeboat from the small dock, giving us a view of what once might have been a volcano, leaving the tip of the mountain poking up through the blue-black waters of the Atlantic.

The weather had been fairly good up to now, with only cold, refreshing breezes and the normal rolling swells of the mid-Atlantic. Life on the ship had the feeling of a never-ending rolling side to side. But not so, now. The breezes had gained speed and force, carrying the spoken word far into the sky before one had a chance to hear what had been said. The swells of the sea had grown in size, and their increasing frequency was heaving the ship into a state of constant pitching and swerving. The sky was darkening into a thick black mass of clouds, rolling and twisting furiously above us.

A few of the crew were ashore at the time, and we sent out a lifeboat with the hopes of retrieving some of them. By this time, the Captain and I were leaning over the port rail on the foc'sle, inspecting the anchor chain. "Hey," he yelled, "check that chain for me!" as we both leaned over to check it.

The lifeboat returned empty but for its skipper and hookman, and the boat was raised and secured in its place on the prom deck. Arrangements were made by radio to accommodate the crew ashore in a hotel for the duration of the storm. We had the rest of the crew below decks, madly securing everything in sight. Nobody wants to be hit by a flying file cabinet! (Well, okay -- those things were already secured -- the regular course of business on a ship. But we secured all the small stuff.) 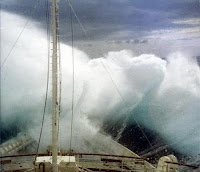 The wind was up around a force ten now (approximately 60 mph). The ship was being torn from its position, anchors dragging. Soon we would be beached against a cliff we were near. The Captain called an all hands evolution (used only in emergencies). Up on the bridge with him, soaking wet between the rain pelting down and the airborne froth from the ocean, we picked up anchor and steered for the lee side of the island. It took about two hours to make the usually 30-minute trip, fighting against the wind and waves. Once we arrived at our destination, we set a course head-on into the now twenty-foot waves. The winds were now up force 16 or 17 -- 120 mph. The waves were tall and sleek. Pointing up to a crest, the glassy waters turned into a boiling froth which stung the face as the winds hurled the bullets of water through the air. Between the flying foam and the thick wall of rain, our lookout (who had been tied to the flying bridge by a three-inch rope) could not see much further than one or two feet ... the Captain had me order her down. Waves were stretching and leaping up to the flying bridge (our highest deck, five decks from the water line) and smashing down upon us. Our bow was mostly under water, our ship pitching and tossing about.

The storm continued in this way for three days ... we sailed up and back the lee of the island many times, awaiting the end of the winds and waves. By the end of the third day, we felt the waves decreasing in size, the winds calming ... our hurricane left us as quickly as she had come. Smooth seas, electric air -- a deathly feeling of quiet apathy where there had been furious motion for so many hours.

We sent out a boat to get our stranded crew from the island, unsecured below decks, and got some sleep. Life at sea was back to normal; our hurricane had passed on to hurricane heaven and left Old Man Sea pacified once again.

(The above photo and painting are not pics of this storm nor of the ship I was on, but are very illustrative of how the waves looked!)