For one year, we lived in "Hillcroft Manor" on Geneva Road, across the street from the Fox River, in St. Charles, Illinois. I was 11 at the time. I don't even know if it's still there. It was a beautiful house on a one-acre hill, built by a piano maker (so it had a lot of gorgeous woodwork). [Note: Some years after writing this post, I found out that indeed the house is still there. A real estate developer has been trying to tear it down. I hope he fails in this quest!] 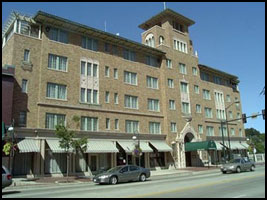 When we first arrived in St. Charles, we stayed for a few weeks in the beautiful Hotel Baker. It was a very classy place, with a live elevator operator, a very old fellow by the name of George Washington Carver. He and I had the same birthday ! And I celebrated my birthday while we were there. I used to go into the fancy ballroom and play their piano.

I used to sometimes go into the woods that separated our house from the next house over (where, by the way, the 16-year-old boy was very cute and I had a crush on him), and cut little paths with my dad's machete. I would also go across the street to the Fox River with my little cassette deck with the condenser mic on it, and record the sounds of the river -- the birds, the water lapping at the shore, the breeze rustling through the leaves and branches of the beautiful, old trees. I remember once during the cold winter, my kid brother went out on the ice and, poor guy, fell in as the ice gave way. His friend pulled him to safety with a long branch, and my brother suffered the consequences (a bad case of bronchitis).

We also had a school project hatching chicken eggs, and I took three of the chicks home and raised them until we finally gave them to a farm owned by some friends. One of the chicks had a broken leg, due to it having been stuck to the inside of the shell. A farmer friend set the chick's leg with a toothpick, and it grew up to be a healthy and very ornery rooster.

I also remember babysitting the three children of some family friends who lived in a huge fixer-upper out near Aurora, in the corn fields (are they still there ?). The place had no glass in the windows (fixer-upper). I was babysitting a six-month old, a four-year-old and a six-year-old. And two goats. I was "into" weather then (still am !), and knew the different types of clouds and what they brought. I saw a nasty looking black squall on the horizon, and told the kids to get the goats into the basement and that they had three minutes to do it. And we all joined the goats. Lo and behold, within three minutes, there were tornadoes flying around in the sky (none touched down where we were), and a wonderfully noisy storm.

And last, but not least, I remember the Halloween party my folks let me have in the basement. (We had a finished basement.) We played "spin the bottle", and the loser had to kiss somebody (we're talking just a quick peck -- we didn't go any further than that back in those days !). I had to kiss the cutest guy in class, which was totally embarrassing.

Sometimes the Universe has a funny way of communicating with us. And sometimes it has an odd way of connecting us. Today I Googled "Hillcroft St. Charles Illinois" because I walk by Hillcroft every day. I *have* walked by just about every day for the past six years, since moving to my house nearby, but it was not until a month or so ago that I noticed the word "Hillcroft" engraved into the stone pillar at its entrance. I was immediately enchanted by this. The property itself has always reminded me of England with its verdant hilly acreage and the soft and painterly textures of the shrubs and trees. But I always referred to the house as the "Villa" -- sitting there atop the hill in its stately, otherworldly elegance. Just this morning I said to myself "I would love to be friends with the people who live there." Of course, nothing stops me from approaching the door and knocking except a stubborn shyness and perhaps an overdeveloped sense of decorum.

Yes, Hillcroft is still there. I fear for the beautiful land around it though -- developers have apparently purchased most of the hill below the house. This makes me so sad. As does a lot of the "progress" around St. Charles. So much development - amounting to urban sprawl - and so little regard for what was. I guess I'm just an old fashioned kind of gal who yearns for the way things used to be. At least the good things. The things we remember to be good and beautiful and true. The things we write about in blogs titled "Memories of St. Charles, Illinois". Greetings from St. Charles!