Running With the Bulls

Pamplona, Spain is not the only place in the world where people run with the bulls. One such other location is Terceira, Açores (the Açores are a group of stunningly beautiful Portuguese islands out in the Atlantic).

I ran with the bulls in Terceira. Not many people know this fact!

The air was fresh, with a salty ocean breeze. The winding streets were cobblestoned and absolutely packed with people. And I ran with the bulls there.

I've seen it written that the bulls are kept tethered on a line. I do not recall this being the case when I was there! The horns were tipped and therefore couldn't pierce one's body, but I think the bulls were running free ... at least, I thought so at the time! One friend of mine got tossed by a bull. He flew several feet through the air and landed unceremoniously on his bum, and boasted for days afterwards.

As for me, I was helped up onto a fence wall in the nick of time by several other youngsters (slightly younger than I), from which I breathed a sign of relief and watched the bull trample by.

It's interesting that at that age, nothing seems remarkable. For me, it was just another day off -- no different than hitting the cinema or romping at the beach.

It's nice to be able to say that I've run with the bulls. It's a good memory.

(These are not photos of my own experience, but they are photos of bulls running in Terceira!  And this is what it was like when I ran with the bulls.) 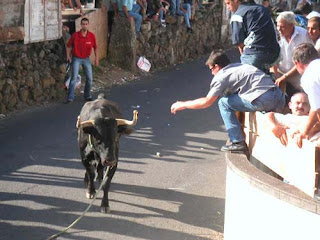 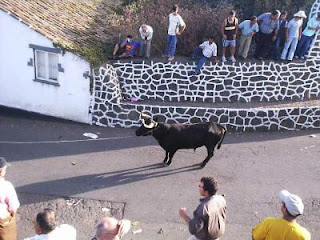 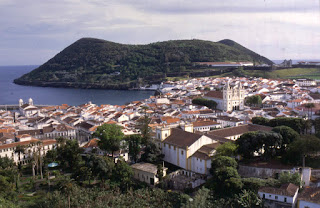 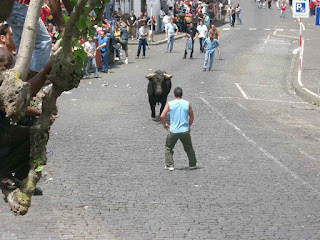